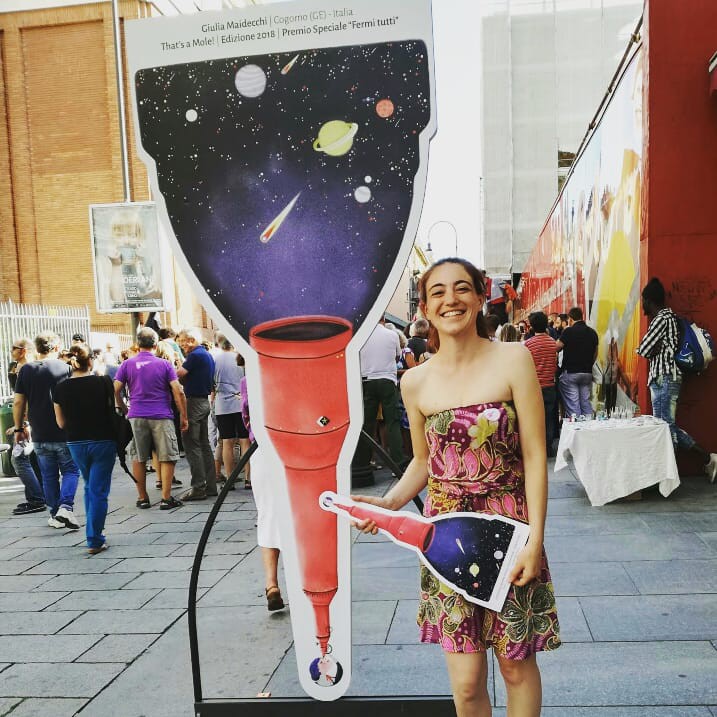 That's a Mole!: the award Ceremony

Exhibition beneath the Mole Antonelliana in Turin

I'm so happy, today I've attended the inauguration of That's a Mole! Exhibition and it's been gorgeous!
The location is, of course, amazing: the illustrations are on show along Via Montebello, which is just beneath the Mole Antonealliana (it looks HUGE in person). However the whole event has been even more surprising. The organisers have been helpful (I was even offered an hotel room for the night!) and creative, a group of great people. They arranged music and dancing entertainment to start the event, then a super funny presenter disclosed every single piece and he told something about it and/or interviewed the illustrator. And... yes, I was interviewed! I got embarrassed as I usually do when I speak with a microphone, but it was beautiful telling about being awarded for an illustration about astronomy while being a scientist myself.
It's been an honour to me receiving the "Fermi Tutti" Special Prize from Luca Latronico, who is the responsible of the Fermi Project of INFN, and it's been interesting talking with him about his research project too. I was given also a large print of my illustration that will travel by bicycle with me through France before coming home ...I hope it is bikeproof!.
The exhibition will is being on show until September, so if you plan to visit Turin and the wonderful Museum of Cinema during the summer you'll be able to give it a look. Otherwise you can browse the newspapers and websites that speak about it: Il corriere della sera - La Stampa - TorinOggi - Turin Town Council - Museum of Cinema